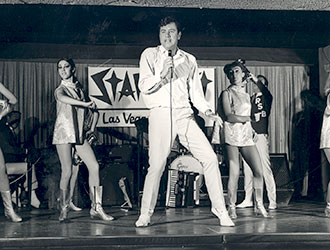 Brendan Bowyer, who has died in Las Vegas at the age of eighty-one, was Ireland’s first pop music superstar and is easily one of the most influential figures in the entire history of Irish entertainment. As lead singer with The Royal Showband, and subsequently The Big 8, the Waterford-born singer and musician was a formidable vocalist with a terrific range, not just in respect of scale, but in his breadth of musical influence. He dominated live concerts, studio recordings and, for at least fifteen years, Ireland’s showband circuit.

The nascent scene from which he emerged during the late 1950s has long been one of the most lazily mis-represented within Irish popular cultural history. By consistently failing to properly frame the impact of the showbands as a driver of wide-scale congregation across all parts of the country, rural and urban, Bowyer’s legacy tends to be unfairly lost. But with their odd compound of external influences and homespun sensibilities, the showbands were a distinctive and hugely important force in the re-drawing of an Irish cultural identity which, into the early 1960s, became increasingly youth-led. He was a key actor in that evolution.

Fronting The Royal Showband during the decade in which dance halls and live venues sprung up all over Ireland, and around which a formative entertainment industry took root, Bowyer was an unprecedented commercial draw. Like many of those who served their time on that circuit, he was an asset that was relentlessly sweated, to the point where he became the definitive break-out figure from that period. With a swagger in his hips, a permanent pout and a fine set of pipes, he was home-grown and dangerous.

Born in 1938, Brendan Bowyer represented a constituency for whom access to international popular cultural influences was at a premium. ‘The only way we could hear rock ‘n’ roll was on Radio Luxembourg, and we didn’t have a television set, so another place to encounter that was in the local picture house in Waterford’, he told the music writer and journalist Joe Jackson, in an excellent Hot Press interview in 1995. So, unsurprisingly, he modelled his stage personae on that of one of his heroes, Elvis Presley.

But while Presley deliberately played with fire, attracting moral outrage after his first television appearances in 1956, Bowyer, carefully handled by his management, was more cautious. He could pop his fine frame just as spectacularly as Elvis, and frequently did. Yet, mindful of the sensibilities of his audiences and, one suspects, of those booking venues all over the country, he could just as easily knock out maudlin traditional ballads like ‘Danny Boy’. And to the same effect.

Typically, Irish music history pays scant attention to what went on in and around live venues in this country before Rory Gallagher’s now legendary tour in 1974. As a teenager, Gallagher himself enjoyed a formative if restrictive stint with The Fontana Showband in Cork, while another graduate of that school, Van Morrison, has always acknowledged his days as a young jobbing musician with The Monarchs, the Belfast-based outfit with whom he served his own apprenticeship. But Brendan Bowyer pre-dates both of them, and in the timeline of Irish entertainment history, he connects Mick Delahunty’s big band with Philip Lynott’s Thin Lizzy.

Led initially by The Clipper Carlton, Ireland’s showband circuit evolved out of a far more serene, ballroom-skewed, big-band scene where musicians were usually seated, dressed formally and read from sheet music. Lining-out as mini-orchestras, the likes of Delahunty, Maurice Mulcahy and Johnny Quigley dominated the live circuit here, often in the face of considerable condemnation from the pulpit and behind the altar. But men and women danced on regardless, increasingly in commercial halls where standard house rules were rigidly enforced at live shows that often ran for five or six hours, drenched in etiquette and notions. At The National Ballroom, on Parnell Square in Dublin, for instance, women and men were seated on long benches, separated by gender, on opposite sides of the hall, and no close physical contact was permitted. Those who flouted the conditions – randy blokes, for the most part – were shown the door.

Nodding to the increased availability of British and American cultural influences – music, motion pictures, books and magazines – the showbands took live entertainment in Ireland to another level. For starters, they performed on their feet and, with electric instruments and amplified sounds, were a far more forceful and sensuous concern. Communion, contact and the working up of sweat in barely-built ballrooms that were often airless and spartan, became the new normal: within this frame, few performers were as potent as Brendan Bowyer.

I have written previously about how the showbands enabled and powered the congregation of Ireland’s young in venues and locations all over the country. About how, intensely for the guts of a decade, those bands had a far more reaching impact on Irish popular culture and society than many of those who long derided them, Bob Geldof and Philip Lynott most prominently. The music peddled by most of the showbands, The Royal among them, is rank: what is far more important is how, in their customised vans and with their slicked-back hair-dos and smart suits, they so physically mobilised Irish society. A national, state-led initiative to bring electricity to rural Ireland began in 1946 but, inside and outside the ballrooms, the showbands culturally lit-up villages and towns all over the island.

Bono apart, I mark Brendan Bowyer as the single most influential Irish male performer in the country’s history. Paul McGuinness apart, I mark T.J. Byrne, The Royal Showband’s manager, as the country’s most ground-breaking and important band manager, Ireland’s first self-styled Svengali. Indeed when Louis Walsh, himself a product of Ireland’s chicken-in-a-basket circuit, was sketching an artist-mentor template for Boyzone during the early 1990s, it was Byrne’s homework that he cogged.

Always bigger than any of the acts he represented, Byrne was a former furniture salesman from Carlow who, far from fearful of the country’s emerging print and broadcast media, actively sought to manipulate it. Sensing a demand for constant content, he was selling a product first and foremost, based on a carefully drawn and diligently styled formula: The Royal were attractive, athletic young men in sharp suits and snazzy hair-dos performing faithful renditions of the pop songs du jour as well as the odd local come-all-ye. Boyzone are commonly held up as a knock-off, cheap-as-plywood tribute to Take That when, in effect, they were modelled, from the top down, on The Royal Showband. Walsh lifted his own shtick entirely from T.J. Byrne and Ronan Keating, Boyzone’s hapless frontman was photo-copied from Brendan Bowyer’s likeness on a printer without any toner that had been left outdoors during the winter.

Nowhere is any of this more apparent than in Peter Collinson’s exceptional documentary film about The Royal Showband, ‘The One Nighters’, which was premiered in 1963 and which was broadcast on the nascent Teilifís Éireann schedules the following year. Although pre-dating Richard Lester’s film about The Beatles, ‘A Hard Day’s Night’, the movies have much in common. In his book, ‘Real Ireland’, Harvey O’Brien notes how the two projects depict their subjects as ‘happy-go-lucky boys with clearly-defined semi-comic personae’. But in keeping with a popular showband theme, ‘The One Nighters’ is distinguished more by what it doesn’t cover as for what it does.

Its a remarkable film on many levels, especially in terms of its cinematic ambition: at the time Peter Collinson was a floor manager in RTÉ but he went on to direct a number of feature films, of which ‘The Italian Job’ is probably the best known. An embedded, fly-on-the-wall documentary film that follows the band over the course of a typical twenty-four hours in its working life, none of the band members actually speak on camera. All of their contributions are made using clumsily-delivered voice-overs, while T.J. Byrne steals every scene in which he features. And there are many.

Collinson – clearly with Byrne’s executive input – portrays The Royal and their audiences in line with a vision of Ireland outlined by Eamon De Valera in a Saint Patrick’s Day speech in 1943. With its carefully-selected nuances, ‘The One Nighters’ is scripted in the spirit of ‘cosy homesteads’ and ‘the sounds of industry’ and presents, from its opening scenes onwards, the contest of athletic youth and the laughter of happy maidens’.

Although playing a fresher, more risqué form of music that routinely attracted the ire of political, establishment and church figures, The Royal are deferential throughout to an older order and to family values, especially. By performing well-known traditional ballads like ‘The Auld Triangle’ and ‘Danny Boy’ for Collinson and his cameraman, Robert Monks, alongside what were known at the time as ‘jazz’ numbers, they’re showcasing an ideology as much as a technical ability. ‘The difference between them and any other international stars is that they refuse anything that usually goes with the money and the fame’, runs Frank Hall’s voice-over. ‘They live in ordinary little houses in a quiet little town in Ireland’.

The reality, of course, was much different. The Royal were Brendan Bowyer’s band and, when he left them in 1971 and formed The Big 8, neither of the two outfits did anything like the same degree of business again. Bowyer led a complicated life thereafter, one of a host of high-profile showband figures to fall prey to chronic alcoholism, and was fortunate to survive a number of drink-fuelled episodes in later life. Given his life-long Presley fixation, its only appropriate that he died in his adopted home in Las Vegas where, like Elvis before him, he had long become his own tribute act.

The obvious temptation is to commemorate Brendan Bowyer with The Royal’s best-known song, a cover of ‘The Hucklebuck’, written in 1949 by Andy Gibson and first recorded by Paul Williams and The Hucklebuckers. Or by the well-worn story of how, in a Liverpool theatre in 1962, The Royal were supported by an emerging local band, The Beatles. But Brendan Bowyer leaves a far greater and much more interesting legacy behind him: a huge amount of good, bad and ugly accompanied his life as Ireland’s first runaway pop music idol. But it’s a legacy that, because of the sepia-tinted way we’ve chosen to traditionally tell the story of Ireland’s showbands, isn’t as easy to locate as it might otherwise be.