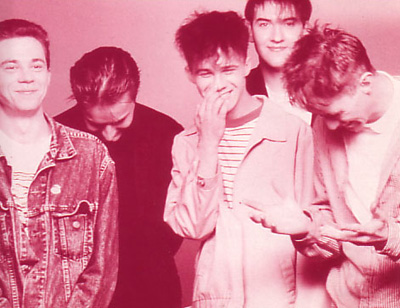 Trashcan Sinatras have long been one of my favourite bands and I’ve spent years giving them the shift of death in print, on television and on radio. We got behind them royally during my time on No Disco, where tracks like ‘Hayfever’, ‘I’ve Seen Everything’ and especially ‘The Genius I Was’ appeared as regularly as Donal Dineen himself. And to no real effect :- a noble handful at the back remained attentive while everyone else demanded more Mudhoney.

The band has played live in Ireland infrequently, usually to small but adoring audiences, and I’ve seen them in a variety of different Dublin venues, most notably [and least memorably] in a hell-hole in Temple Bar called The Hub, in 2003.

Muse was one of Ireland’s first on-line culture and arts ventures, edited and curated by Jim Carroll and, for a while, I contributed a regular column that, in hindsight, reads very, very angrily. Approaching the end of the millennium, I’d cultivated new interests and had returned to several others and, to all intents, had no stomach for writing solely about music. Jim, to his credit, gave me an absolutely free reign and we’ll re-post some of those other pieces – which are very personal – over time.

But while Trashcan Sinatras prepare for the launch of a sixth studio album, we thought it was maybe timely to return to this piece, which first appeared in Muse in February, 1999. The band had been dropped by Go Discs Records some years previously and had been forced to sell it’s Shabby Road Studio in Kilmarnock as a result. Their live date in Dublin’s Mean Fiddler on March 5th, 1999 – with which this piece coincided – was one of only a handful of shows the band played that year.

With the music industry turned inwards on itself, and technology developing out of all recognition, I saw hope in the distance for Trashcan Sinatras [who, at that point were still referenced also as The Trashcan Sinatras]. And I still do.

Ten years later and The Trashcan Sinatras are still crawling at their own pace. Nine years since their first record and, through the gin and the rain and almost in spite of the whole world, they’re shaking through. Three perfect elpees into a career that, on your ledger, reads bleak and blank. But only if you’re talking numbers.

Like a host of angels before them and no doubt long after them too, they inspire within their own fun-sized legion of support an absolute and blanket devotion.  A bit like The Fall I guess, only with better songs and with more audible words.  Which is only as popular music at its most enticing and anointing should be, nonetheless. My own rented townhouse is, by way of an example, adorned with more of their badly hung promo-matter than anything else.  Up there, pride of place between Keane and McGrath and for no other reason than that mine is a house that’s proud to have known them.  Prouder still to have shaken itself silly to their songs.

The Trashcan Sinatras are currently without a record label, without a bob and without a hope.  At least on paper.  In the last while, they’ve also undergone serious re-constructive surgery, something which may or may not be connected to all or some of the above.  For those of you who know them merely from their erratic pop videos, seen sometimes on quality music television, or from all of those very similar early evening radio shows, the band is gasping and ailing and yet somehow still alive. Surviving on scraps and on someone else’s good-will, still around kicking on doors and stealing your booze.  What’s really great to report, though, is that they’re still resolute, still clever, still articulate, still funny and still write tunes that, for the most part, stick like good glue.  Even if, given the appalling state of the domestic music industry’s health, this is an irrelevance.

Popular music is currently bracing itself.  It is an industry increasingly more conscious of its own need to survive, sensing all manner of paranoia the more multi-media infiltrates every new housing estate.  And as more and more music is forced onto an ever more selective and declining market, song quality has become increasingly more obsolete, stuck well down the pecking order behind marketing budgets and legal fees. It’s not so much the quality of the single, basically, as the size of the in-store poster display.  Or the scale of the strike-forcing on your first three singles.

God, how Noel Gallagher must be ticked pink right now.  Four years ago, Oasis were the vehicle onto which the industry tied its best horses, doing what it had always done best and seizing the moment.  Not defining it, merely exploiting an unexpected good fortune.  Opportunity meets culture statement with the blessing of the beautiful people and we’re off.  Sadly bands like  Pulp and Blur [who, at the time, rode the slipstream most prominently and who also, last time around, made their best records in ages even if none of you bought them], can never hope to repeat their previous market penetrations or re-visit their former chart positions. It is, for both of them after a fashion, a downward slide from here.  The industry drove them onwards to the point of overload while it could and, after radio re-coiled and marketing paranoia set in,  it drove them back to when it doesn’t require them. Even if the songs were far better.

What the industry is facing and what it is already in some cases coming to terms with, is an increased sense of  polarity.  The space and the distance between the haves and the have-nots has rarely been as pronounced – not since the middle of the last decade, if the truth were told.  So for all of E.M.I.’s very public investment in, say, The Divine Comedy, Neil Hannon’s immediate future is not in the hands of the man who signed him but rather in the hands of his marketing and product managers.  Because even if he does deliver E.M.I. the finest record of his generation [and it’s not that they’d notice, either way], he is dependent ultimately on the size and the force of the marketing budget behind it.  Hate to break it to the Mercury Rev fans and all but that’s pop.

Popular music has always been driven onwards by recurring fads and fashion and, with every passing fifteen years, familiar themes become re-apparant.  The British popular music industry has become so top-heavy over the last five years with a slew of ‘almost-theres’ – like The Supernaturals, Travis, Cast and, even though it kills me, The Trashcan Sinatras – that it cannot now sustain its own weight.  So what has emerged over the last six months, and what will become increasingly more obvious the closer we get to the millennium and beyond, is a move away from the politics of accounting.  A return to fanzine politics. To branding and loyalism. To C86‘s no-fi, no-nonsense sense of purpose.  To when quality songs and word-of-mouth propaganda were more than enough to overcome poor recording standards, second-hand sleeves and botched production.  It is necessity breathing invention by another name.

Now I don’t really wish to sound like another flatulent old anorak, but the more I see and the more records I hear, then the less I’m surprised by popular music.  So The Trashcan Sinatras are currently in Japan where they’re working up another mini-storm to probably, an audience of about twelve. How they possibly keep on keeping on, and why, astonishes me, given that the marketeers and the speculators under-wrote them ages since.  But there’s far more to life than cash books and balances,more than one way too, to skin your grandmother’s cat.  So what price their second coming at the year’s end, wrapped and bound with Belle And Sebastian and Snowpony on a gift-pack cassette labelled with love and with the inscription C-00?