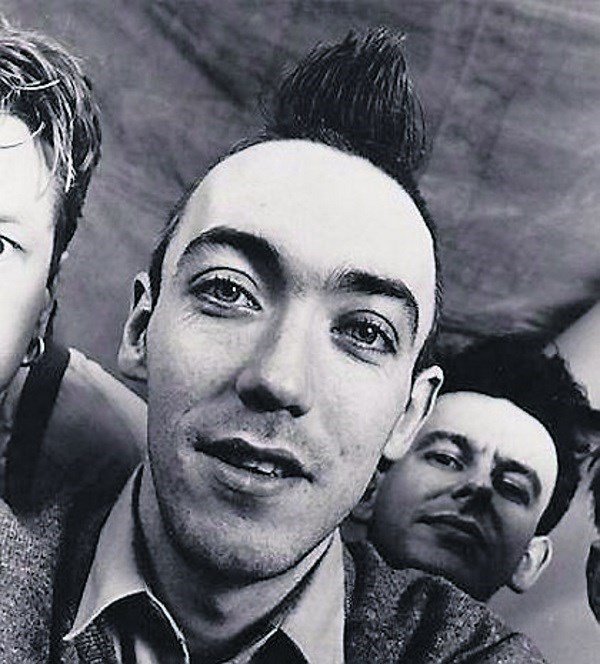 Mick Lynch, the Cork-born musician, singer, actor and performer who passed away yesterday after a long illness, will be familiar to those of us who served our time around the margins of left-field Irish music during the 1980s, and especially those who preferred their indie with an absurdist bent.

I first encountered his name on the ‘Kaught At The Kampus’ mini-album, which was recorded at the U.C.C. Downtown Kampus in The Arcadia Ballroom on The Lower Road in Cork in August, 1980, and released on the fledgling Reekus label. As the lead singer with Mean Features, a rowdy, unsophisticated four-piece that, among it’s number, also included Liam Heffernan on guitar, Lynch’s band featured proudly on that record alongside Nun Attax, who contributed three songs, Urban Blitz and Microdisney. ‘Kaught At The Kampus’ was conceived in the full-on, can-do spirit of punk rock and sounds far better in theory than in practice: it’s a shambling, raw and poorly recorded affair. And, as such, is the very antithesis of another record beloved of an older, more settled crew, Rory Gallagher’s live double-album, ‘Irish Tour, 1974’. And deliberately so.

The six-tracker served as a four-band calling card and a reminder to Dublin – and beyond – that Cork too had plenty of fire in it’s belly and ammo in it’s locker. And of course that mini-album also records three of the most compelling frontmen in the entire history of Cork rock music on the one disc: Lynch, Finbarr Donnelly and Cathal Coughlan.

Lynch and Coughlan shared previous history and both had featured briefly in Constant Reminders, an erratic five-piece that also included Seán O’Hagan and Dave Galvin, both of whom back-boned the early Microdisney line-ups. But it was with Mean Features that Mick Lynch, even then an accomplished actor, found his voice, literally and, according to those who saw them up close, his sea-legs as a performer.

I’ve written previously about U2’s popularity with Cork audiences from 1979 onwards and we touch on that in a piece that’s available here. U2 had started to develop a reputation as a forceful live presence, especially so with regulars at The Downtown Kampus, and the band’s associations with the city and The Arcadia Ballroom have been well told. As ‘Kaught At The Kampus’ was being committed to vinyl, U2 were set to release their second, fully-fledged single, ‘I Will Follow’ while elsewhere, another Dublin band claiming punk rock lineage, The Boomtown Rats, were already well into their pomp. They were about to unveil ‘Banana Republic’, Bob Geldof’s take on what he saw as an overly traditional and backward-skewed Ireland in the wake of the Papal visit here in 1979. In terms of ambition, tone and scale, Mick Lynch – like Donnelly and Coughlan – was as far as it was possible to get from U2 and The Boomtown Rats, and it would always be thus. While Bono thieved liberally from scripture, Lynch looked to Flann O’Brien and the more abstract sean nós traditions for his lyrical cues.

Even within Cork circles, though, Lynch, Donnelly and Coughlan were perennial outsiders: threatening, physically imposing and unlikely. Their more considered, competent peers – like Poles Apart, especially – were aspiring to the pace set by mainstream acts like The Police. But Mick Lynch was far more taken with the half-cocked philosophy of ‘The Third Policeman’ instead.

By the time I’d started to fetch up at Cork’s darkest and dankest live music venues, he’d already departed the stage and was living in London. Back in 1984, Cork could often be an unwelcoming place for its youth, and certainly no place for well-read young men with such skewed artistic visions and notions. Like many before him, and plenty more thereafter, London just presented more opportunities and was awash with potential.

Mick Lynch is best remembered – and clearly very fondly recalled – for his work with Stump, a four-piece band he joined during his time in England and that also featured Rob McKahey, from Blackpool, on drums. Stump’s first and only full-length studio album, ‘A Fierce Pancake’, [Ensign Records, 1988] remains one of the most curious and uneven records in the history of alternative Irish music, but is no less charming for that, even if tracts of it are inpenetrable. With it’s blatant Beefheart and Zappa strains, it’s an often discommoding record, as disconnected within itself as it was from all of the many major label Irish releases of the period. Indeed there are times when Lynch’s wordy fancy just takes flight, kicking against the often boisterous, angular work of guitarist Chris Salmon and especially Kevin Hopper, the bass-player. And yet on their best known songs, ‘Buffalo’ and ‘Charlton Heston’ Stump found a real groove and cut a lovely, left-field shape: the closest the band came to convention.

In any self-respecting over-view of contemporary Irish popular music, Lynch exists as far more than a mere quirky foot-note. When The Frank And Walters and The Sultans Of Ping F.C. came roaring in from nowhere ten years after ‘Kaught At The Kampus’, it was obvious – and maybe convenient ? – to trace their influences back to whatever they’d picked up locally. In Dublin and in London I’d often hear the line ‘there’s something in the water down in Cork’ and I’d counter that by pointing out the differences between the words ‘eccentric’, ‘eclectic’ and ‘electric’. And I’m still at it.

But in terms of approach and conviction, and that sense of just refusing to bow to compromise or expectation, Mick Lynch, with Finbarr Donnelly and Cathal Coughlan, showed the way and the light. And, decades later, the best and the most interesting ones still follow behind them.