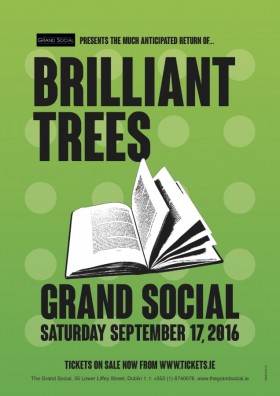 Twenty years ago, when Brilliant Trees were hot to trot, good to go and had just released their formidable debut album, ‘Friday Night’, Dublin were reigning All-Ireland senior football champions and Charlie Redmond, of Erin’s Isle and East Finglas, finally had his just reward. If Jason Sherlock had taken the sport by the throat with a drop of his callow shoulder, a tearaway’s slalom and a poacher’s eye to become Gaelic football’s most sellable asset, Redmond was Dublin’s battle-worn pillager, a rounded foil to the swagger of youth, the static in the flow.

They celebrated that 1995 All-Ireland win long and hard out in West Dublin. The Erin’s Isle club, located in deepest Finglas, also provided Mick Deegan and Keith Barr to the spine of that side ;- like Redmond, they were, as you’d expect, cut from durable stuff, seldom beaten. And so it’s apt that, on a night when the city centre is as vibrant as I’ve ever seen it on the eve of an All-Ireland final – and during another period marked by the dominance of a Dublin side playing cavalier football  – that Brilliant Trees have re-marshalled their forces and, as they used to do routinely over the years, taken over a small part of town. Theirs has always been a loud and partisan travelling support and, years since they last assembled so formally anywhere, they’re in from the suburbs and out once again in numbers tonight.

I’ve written previously about Brilliant Trees and about how, never too showy or overly complicated, they were such a consistent, classy and, in their own way, unusual presence around a scene that burst into life in Ireland’s regions after the World Cup in 1990 and that soon caught fire elsewhere. Physically lean, politically sussed and as principled as would allow, Brilliant Trees weren’t at all out of place on the Cork Rock bill at Sir Henry’s in 1991 where they shared a standing with the likes of The Frank And Walters, The Cranberries, Therapy?, Toasted Heretic, The I.R.S., Lir and The Sultans of Ping. And while it possibly took them longer to find their sea-legs and to realise the full range of their gift, their two albums, 1996’s ‘Friday Night’ and 2000’s ‘Wake Up And Dream’, rank as two of the purest – if slow-burning – Irish pop records of the period. Even if, in keeping with much of the rest of their story, they rarely feature in histories and lists, even those compiled in – and about – their own backyards.

Throughout their various exiles, I always felt that The Trees had plenty of business left unfinished and much left unsaid. In direct knock-out, the scoring systems just didn’t suit their style which, casually and at times naively, blended orthodox with southpaw. Many other, far lesser contenders from that period seemed to just glide the canvas a bit easier, skipping in and out of trouble, cross-punching a bit more readily. And there’s only so far and so wide a positive outward face will stretch when it dawns that the music industry is far more about the vagaries and the unreliability of the industry and far less about the regular detonation of the music. So little wonder then that, after one pointless blow-to- the- head too many, Brilliant Trees, however reluctantly, heeded the pleading from their corner and, heads bowed, walked away from the ring.

On the not inconsiderable matter of winning and winners, you’ll often hear sports psychologists mention how some of the most remarkable victors from across all walks of life are often utterly unknown. About how, away from the numbers and the footlights, personal victories are routinely achieved in all sorts of conditions and against all manner of difficulty, often determined by exceptional individual circumstance. And so, simply by walking on and out in front of a sold-out Grand Social crowd, comprised largely of the familiar faces of long-time friends, acquaintances and ultras, Brilliant Trees have already nailed it. With a meaty set pulled largely from the two albums and popped at the turn by a track or two from a new, forthcoming record, they sound as familiar, welcome and warm as they did during their first flush. Augmented by a steel rod in their backbone – Dave Morrissey on keys, Tony Brerton on drums and, for a magical fifteen minutes in the middle order, Ciarán Kavanagh on guitar – it’s re-assuring to see them with real weight on. While Alan, Tony and Sid look as lean and as fit as they did in their early publicity shots from decades ago, their sound, as you’d maybe expect, has wintered well, way more full-bodied.  Musically, they’re packing a middle-aged spread and they’re looking terrific on it.

From the reluctant shuffle of the opener, ‘Like You A Lot, Love You A Little’ to the down-beat closer, ‘Home’, and in around the familiar, powerful verges of a canon in which  ‘Take Me Away’, ‘Talent’, ‘Let It All Go’, ‘Heartstrings’, ‘Who Hurts Most’ and ‘In Your Dreams’ sound Especially ageless, The Trees know that now, definitively, they can park their anxieties. There was a time tonight when, with Ciarán adding a third guitar, they replicated the current Trash Can Sinatras line-up in tone and style as well as in physical heft. And while the more direct, less subtle end of the catalogue nods to far more familiar influences – The Smiths, Ride, Blur – the current single, ‘I Know, I Know’ is in far less of a hurry and, smooth and unforced, suggests that, what’s coming down the line could yet be the most beguiling phase of of what’s been a long and colourful journey.

And so, more confidently on their own terms than ever previously, Brilliant Trees are back. But for how long and for how far, who knows ? And does it matter ? No. The forthcoming record will maintain their momentum and give them a fresh wind, for sure. But tonight its enough to simply see them go for it so instinctively, taking the first, nervy step back out onto the dancefloor. Re-born, renewed.